Get an Inside Look at the 2019 FOP Drug Development Forum 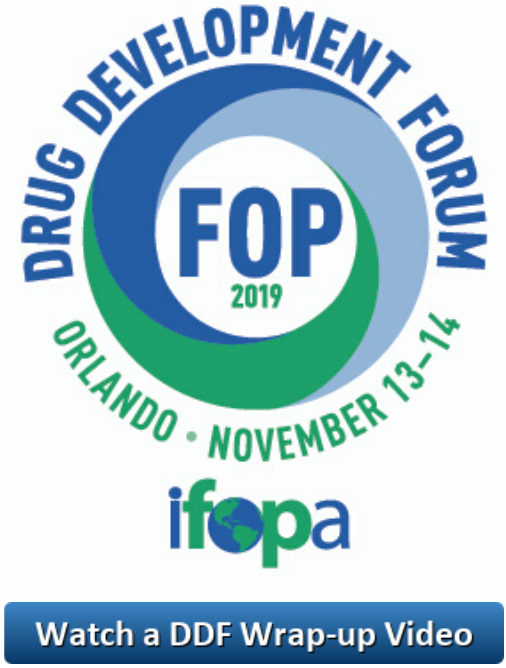 The International Fibrodysplasia Ossificans Progressiva Association (IFOPA) held its fourth Drug Development Forum (DDF) on November 13-14, 2019 in Orlando, Florida. The 2019 DDF attracted participants from 19 different countries around the world. The IFOPA hosts this symposium to bring FOP experts together to discuss the latest research, solve drug development challenges and to strengthen the growing network of research collaborations across the globe. This year’s DDF brought together approximately 160 researchers, clinicians, biotech and pharmaceutical company representatives, regulators, advocates and people living with FOP. We were also excited to meet with and welcome many new academic and industry researchers as well as new FOP clinicians to the Forum.

The 2019 DDF keynote speaker was Dr. Emil Kakkis, President and CEO of the pharmaceutical company Ultragenyx and President of the nonprofit EveryLife Foundation for Rare Diseases. Dr. Kakkis highlighted his experience developing 10 treatments for rare diseases. During this talk, several pragmatic development recommendations for FOP were discussed, including the integration of imaging and biomarkers into development plans as well as blinded-start study designs.

Following the conclusion of the DDF, the IFOPA hosted a scientific poster reception for attendees of both the Drug Development Forum and the FOP Family Gathering. It was a wonderful opportunity for FOP families to interact with researchers and hear firsthand how the FOP research field is advancing.

With six drugs in clinical trials for FOP, this was an exciting time to hold this year’s DDF. During the two-day meeting, 35 FOP presentations were given, with a focus on a wide-range of research and development topics. Throughout the DDF, there was plenty of discussion during the moderated Q&A sessions that sparked new ideas and also challenged our current understanding of FOP. It was remarkable to see how much progress has occurred since our last DDF meeting in 2017.

FOP presentations were given across six “talk” sessions, grouped by similar topics. Abbreviated summaries from these talks are highlighted below.

This session of the DDF highlighted the latest advances in clinical research for FOP.

While the current clinical landscape in FOP is encouraging, challenges await future drug developers as they begin planning their development strategies. The topics in this session explored clinical concepts for future trials.

Several different therapeutic approaches were highlighted in this session as potential ways to silence FOP.

This session of FOP presentations looked at the latest efforts and discoveries in finding novel therapeutic options for FOP.

Understanding the underlying disease mechanisms of FOP will help enable the development of future treatments and will optimize existing clinical care. This session featured six presentations from researchers advancing our understanding of FOP.

The Emerging Investigator section was added to this year’s DDF in order to recognize the next generation of FOP researchers.