The Skeleton of Harry Eastlack

The skeleton of Harry Eastlack, a man who lived with FOP until he died just six days shy of his 40th birthday, is on display at The Mutter Museum of The College of Physicians in Philadelphia. Late in his life, Harry made the decision to bequeath his body to his physician who donated Harry's skeleton to The Mutter Museum so that future generations could study and learn about FOP. Harry's skeleton, one of the few existing in the world, has become a valuable asset to physicians and scientists studying the disease.

The glass case in which Harry’s skeleton dwells has become a window into the medical mysteries and scientific challenges of FOP. It also exemplifies the harsh reality of FOP more than any chart, slide or clinical description could.

Normal skeletons collapse into piles of loose bones when the connective tissues that join bones together in life are removed. To be displayed in human form, skeletons have to be re-articulated or pieced back together with fine wires and glue. As a result of the bridges of bone that formed from FOP flare-ups, Harry’s skeleton is almost completely fused into one piece and could nearly stand on its own without additional supports in place.

Sheets of bone cover Harry’s back. Ribbons, sheets and plates of bone lock his spine to his skull and his skull to his jaw. Additional ribbons and cordons of bone span from the spine to the limbs and immobilize the shoulders, elbows, hips and knees. Thin stalagmites of bone launch themselves from his pelvis and thighs. His upper arms are welded to his breastbone by slender white bridges of bone that cross his immobilized rib cage. 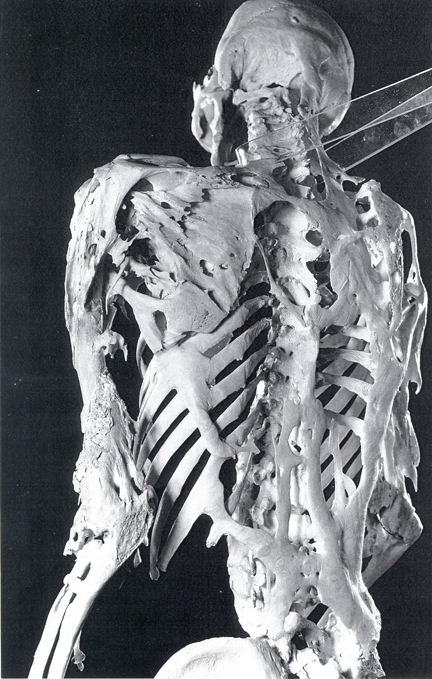 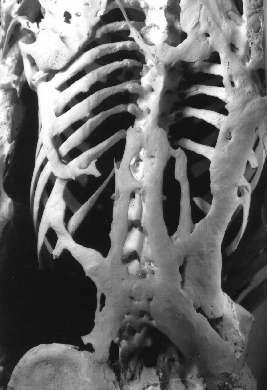