Connecting researchers to advance therapy and drug development for FOP 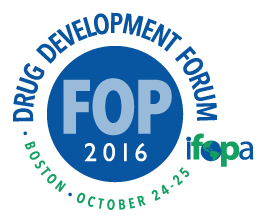 After a resoundingly positive response to the Drug Development Forum (DDF) held in 2014, the IFOPA is proud to host the event again this October 24-25, 2016 in Boston, Mass.

Similar to the 2014 event, this year’s DDF is driven largely by support of the IFOPA and the FOP community. In the landscape of FOP research, the IFOPA, as the largest representative of the patient community, is in a unique position to convene research teams from industry and academia from all over the world to share their findings and build new collaborations.

Betsy Bogard, Director of Global Research Development, IFOPA, says the opportunity for patient organizations to have a central role in these types of forums is meaningful.

“Bringing researchers together is one of the most important things a patient group can do,” she says. “New ideas and connections are formed over coffee breaks and at the dinner table at the end of the day as much as during the sessions. Just getting everyone in the same space at the same time can lead to faster advancement of therapies and research work.”

Bogard points out that bringing researchers together to discuss their work can help avoid redundancies and creates an open space for debate and conversation.

It’s also important the patients’ voices are represented. Forum organizers will include two patient panels to ensure researchers have a chance to interact with representatives of the FOP community. In addition to the patient panels, the forum will begin and end with patient speakers.

Bogard applauds and appreciates the commitment of the researchers who attend the DDF. “We’re very grateful to each person who makes the time to join us,” she explains. “They leave their families and their work at home to travel here, in some cases from the other side of the world, and help us solve the problem of FOP. We’ll be welcoming researchers and community leaders from as far away as South America, Asia, South Africa and Australia this year.”

The Mission of the Drug Development Forum