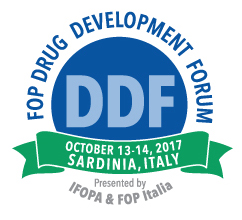 On October 13-14, the world’s leading experts in FOP gathered in Sardinia, Italy for the 2017 Drug Development Forum (DDF). The 2017 DDF attracted researchers from 21 different countries to discuss their latest research findings, to solve key issues in FOP drug development, and to strengthen ties among a growing network of collaborating labs across the world. The 2017 DDF was the third meeting of its kind (the DDF was previously held in 2014 and 2016) and has grown with increased interest and participation from the FOP research community. This year’s DDF, which was co-hosted by the IFOPA and FOP Italia, attracted more than 170 researchers, clinicians, biotech and pharmaceutical company representatives, advocates and patients. We were also excited to meet and welcome many new researchers and clinicians from China, India, Russia and South Korea.

Over 30 FOP “talks” were given during the two-day meeting and focused on wide-ranging topics from basic FOP biology to new therapeutic approaches to updates in FOP clinical development. Throughout the DDF, there was plenty of discussion that provided a springboard to advance the collective understanding of FOP, and to generate new hypotheses, questions and avenues of research to pursue. Many at the Forum remarked how much progress has been made since the last DDF in Boston, MA. John B. Shepard, Ph.D., from the University of Connecticut, reflected how “it's amazing to see the field of FOP research advance by leaps and bounds on a yearly basis.” There are now three drugs in clinical development and our understanding of FOP is accelerating.

This year’s DDF featured two panel sessions. During the first panel, Forum attendees heard from seven people living with FOP. The panelists shared their experiences about living with FOP as well as their hopes for future treatments. During the following day, there was a panel of physicians, pharmaceutical representatives and regulatory participants that discussed current and future challenges facing FOP drug development. During the one-hour session, the panel covered a broad range of topics, including clinical trial endpoints and the challenges of trial enrollment, accelerating drug development timelines, and surgical  considerations for FOP.

Beyond providing a forum for exchanging the latest findings and ideas, the 2017 DDF was also successful in strengthening old networks and forging new research collaborations. Collaborations formed at prior DDFs were evident as presenters highlighted their cross-laboratory research findings from this past year. Dr. Ben Levi at the University of Michigan noted, “There is no better way to advance science than to bring together patients, scientists and pharmaceutical companies. It’s so great to catch
up with friends who now feel like family.”

FOP presentations were given across five talk sessions, grouped by similar topics. Abbreviated summaries from these talks are highlighted below. Watch for summary slides to be released in the near future.

FOP Talk 1: Clinical Investigation of FOP
It is a remarkable time for the FOP community with three drugs in clinical investigation for the treatment of FOP. This session highlighted the development plans of these three therapies, plus the results of a case report series from Dr. Kaplan on the use of imatinib.

FOP Talk 2: Receptor Targeting in FOP
Although FOP is caused by a single defect in one receptor (ACVR1), four different therapeutic approaches were highlighted in this session as potential ways to silence the underlying disease pathology.

FOP Talk 3: Building the Foundation for Clinical Advancement
While the current clinical landscape in FOP is encouraging, challenges await future drug developers as they begin planning their development strategies. The topics in this session explored foundational needs for future clinical trials.

Talk 4: New Therapeutic Approaches in FOP
Researchers are looking for new approaches and compounds that may be efficacious in FOP. This session looked at the latest efforts and discoveries in finding novel therapeutic options for FOP.