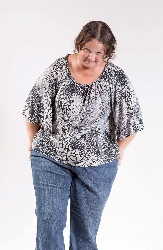 “I don’t think it should stop people,” Kim Shields said to a ten-year-old at the 2016 Midwest FOP Gathering. “You know what the one thing is that all FOPers have in common? We’re all tough. We keep going, and we don’t let it stop us.”

Though she had the telltale FOP toes, it took the discovery of a lump on her neck, two surgical biopsies and visits to many specialists before she found Dr. Kaplan.

“I was learning to drive the year I was diagnosed,” Shields relayed. “But later that year, I lost most of the movement in my neck and shoulders.” She lost movement in her hips in her 20s, though most bone growth is in her upper body.

Shields gradually began to learn more about the IFOPA as she grew older, and traveled by herself to gatherings in 2013 and 2016.

“FOP has been both the best and the worst thing to happen to me,” she said. “My diagnosis has helped shape me into who I am today. I have also met so many great people and we support each other in our battle to overcome challenges of FOP.”

Shields lives the advice she gave to the child in St. Louis by working hard to complete her education.

She is currently an online graduate student in Social Work at Simmons College in Boston, specializing inmental health and substance abuse.

Shields holds her friends in the FOP community near to her heart, three of whom she calls her “FOP Angels.” These friends who have passed on are Jordan Bartholomew (2003), Tiffany Linker (2013) and John Redding (2015). Shields remembers them by their initials, which she has tattooed on her arm.

“FOP won’t get in my way. I am living my life how I choose,” she concludes.