Honest Conversations About FOP Lead to Support for FOP Research

Joey Suchanek, 28, has no problem sharing the unvarnished truth about what living with FOP is really like. From the brutally honest videos that he shares on his YouTube channel to his participation on internet Reddit forums, you can count on Joey to tell it like it is.

Diagnosed with FOP at age four, Joey describes his life as one of “constant changes.” He lost the use of his arms when he was eight and today he’s almost completely reliant upon other people to help him travel, create and edit his videos, and eat when he’s hungry. Since he lost the ability to swallow, Joey now receives nourishment through a tube in his stomach.

Recently, Joey shared his story as part of the International FOP Association’s (IFOPA) In Pursuit of a Cure 2021 Campaign. In an intimate video, sharing scenes from his day-to-day life, he candidly discusses how FOP has shaped his existence… and how he has found acceptance within the confines of the constant changes FOP creates for his body and his abilities.

He says what keeps him going is his curiosity, “…curiosity about what the world can give me.” Joey’s resilience and stoic approach to living give him the perspective to take things one day at a time and make the most of every moment.

Joey is incredibly open and often fields questions about his life online. He had been considering doing some fundraising for the IFOPA and in an unusual turn of events, a Q&A session on Reddit turned into a successful fundraiser.

In an "Ask Me Anything" (AMA) Reddit session, Joey fielded questions from people curious about living with FOP. As part of Joey’s AMA, he asked for support for the In Pursuit of a Cure Campaign and he raised over $3,000 from over 70 Reddit subscribers, individuals who don’t know Joey but were moved by his openness and honesty.

Joey is clear about the limits of what FOP research will likely be able to do for him.

"Research is important to end one of the worst diseases to ever exist," he says. "I don’t think it will be quick enough to help me.

"If I could do anything to stop the pain from happening for little kids, I would do it in a heartbeat because they don’t deserve to suffer."

The IFOPA is incredibly grateful for Joey’s generosity in sharing his story—and helping to raise funds toward treatments and a cure. 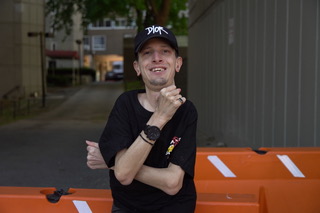