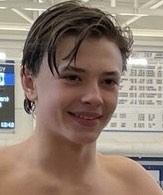 When asked whether he thought his first attempt at fundraising would be such a success, Brett Matlosz responded, “I honestly had no idea what to expect.” Surrounded by a supportive family and school community, though, he knew any effort for his cousin Sienna, who has FOP, would be more than worth it.

Brett describes 11-year-old Sienna as ‘warm, bubbly and full of energy.’ He takes every opportunity he can to spend time with her. Sienna’s FOP progressed slowly for years. But after a fall in March of 2021, she lost mobility in her right hip and knee and is mostly wheelchair bound today. It’s been hard for Brett to watch his cousin navigate an often-unaccommodating world.

“Now that Sienna uses a wheelchair, it has been surprising and disheartening for me to see that many places are not accessible,” he said.

Brett, who is a student and member of the Newark Academy swim team, wanted to raise FOP awareness to spark change. Coincidentally, Ian Cali who also has FOP, is a former student at Brett's school. An annual run in Ian's honor used to take placebut no longer occurs. Brett liked the idea and wanted to revive the event to honor Sienna. Soon, another idea crossed his mind.
“As I was exploring how to bring back the run, my love for swimming began to grow,” he said.

When Sienna was initially diagnosed, our family’sfirst fundraiser in her honor was a swim-a-thon. I felt it was only fitting to do a similar event in place of the run for FOP.”

With great effort on Brett’s part and help from family, friends, his school, swim team and the IFOPA, the Wet Brett Swim Challenge was born. To coincide with Rare Disease Day, on February 28 participating swim teams wore #cureFOP t-shirts for an entire practice. Laps were far more grueling thanks to the extra weight and lag. The intention was to symbolize the physical difficulties experienced by those living with FOP.

This year, several teams participated - Newark Academy boys and girls teams, Metro Lifetime Fitness gold and platinum groups and the Princeton University Club team. Brett hopes this year’s event was only the beginning. After sparking significant local interest and setting up a fundraiser page on the IFOPA website, he is looking to the future. 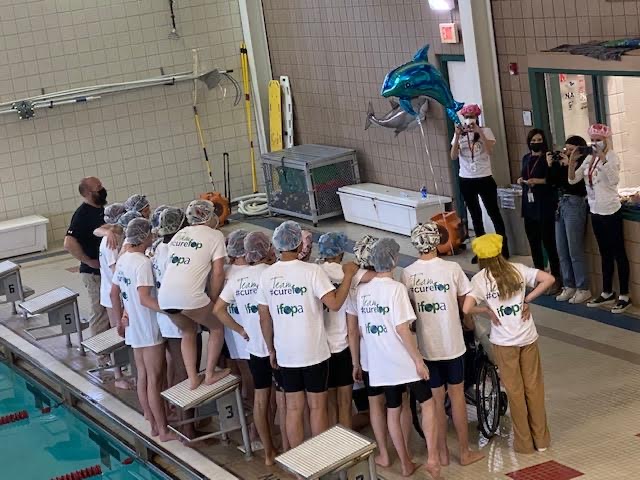 “My goal is for this to be an annual fundraiser,” he said. “With more planning next year, we’ll try to get many swimmers and swim teams to participate and maybe even get corporate sponsors.”

In addition to raising critical funds for FOP research, Brett also wants to raise awareness for millions of people who are suffering from rare diseases.

“My hope is to spread awareness, not only for FOP but a multitude of diseases,” he said. “I hope to inspire participants to understand how privileged they truly are to not have the challenges associated with a progressive disease like FOP. Hopefully, that will give them a greater understanding of the suffering that comes from this and other diseases.

“I also hope to humanize people like Sienna, so those who may not know someone with a rare condition can see how important it is to be inclusive of the differently abled.”

As Brett continues to find new and creative ways to support Sienna and educate others on her condition, she is an example of strength and positivity.

“Whatever challenges she faces, Sienna remains one of the funniest and most uplifting people I know,” said Brett.

Brett is grateful for each person who helped pull off the first Wet Brett Challenge to honor Sienna.

“I’d like to give special thanks to Mrs. Pegeen Galvin and Coach William Blomn for guiding me through the process. I’d also like to thank all the swimmers, swim teams and coaches for their collaboration and participation.” He continued, “Thank you to the IFOPA and Newark Academy for the support and assistance. Of course, I need to thank my mother and Sinjin Owen for their creative input, early encouragement and assistance in bring the campaign to life on social media.”

Finally, to those who contributed to the fundraiser, Brett said, “Thank you on behalf of Sienna and my family. We have been blown away by your kindness and generosity. It means so much to us.”

It’s been difficult for Brett to watch Sienna suffer since her fall last year. But he remains determined to turn concern into progress. Each dollar raised goes directly toward gene therapy research funded through the IFOPA grant at the University of Massachusetts. Brett knows how critical science is to a future free of FOP and is thrilled to do his part to realize to it. He wants anyone who is considering participating in the challenge to know the urgent need for additional funds.

“Mobility loss associated with this disease is real and unpredictable. Research into treatments and a cure could mean the difference between mobility and locked joints for people with FOP, particularly those who have been recently diagnosed,” he explained.

“This is a progressive disease. The sooner effective treatments and cures are discovered, the less negative effects - #cureFOP!”

Visit the Wet Brett Swim Challenge fundraiser page to join the fun and support Sienna and others living with FOP and other rare diseases.