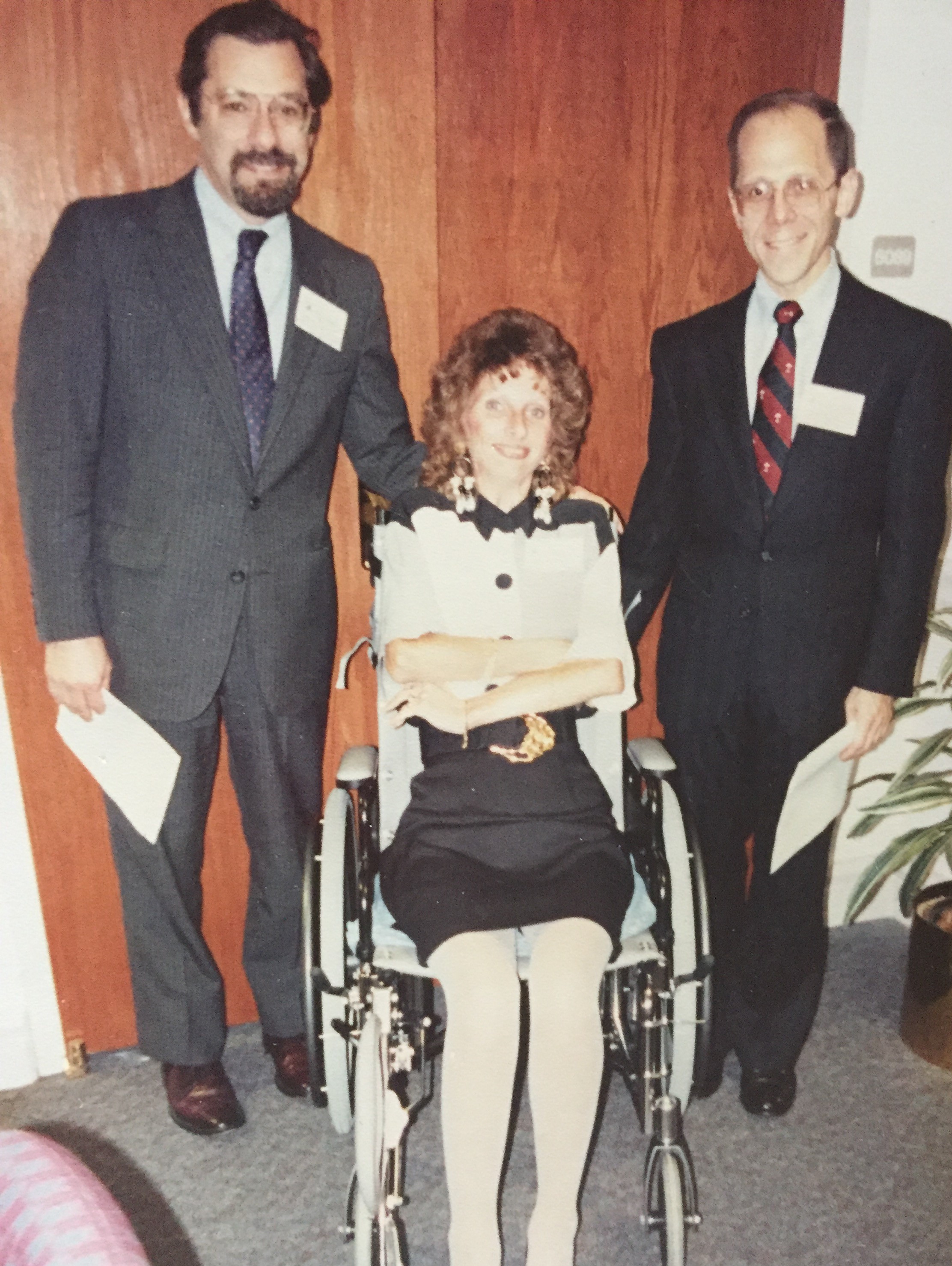 My name is Jeannie Peeper, and in 1962, at age four, I was diagnosed with myositis (fibrodysplasia) ossificans progressiva. There were very few medical articles available about this disease and the doctors gave my parents little hope for my future. I was the fourth child of five, and my parents were determined to provide a life for me that would be as normal as possible. Despite my diagnosis, I enjoyed my childhood, jumping rope and playing kickball. I grew up in a Christian home, where our faith sustained us during some dark and difficult times. I was fortunate that my family and peers never treated me any differently and looking back now as an adult, I am deeply grateful for this gift of being treated like everyone else.

Like my siblings, I attended public school until high school at which time I was homeschooled. I then went on to graduate from University of Central Florida with a BA degree in Social Work in 1985. Soon afterwards, my life was forever changed. At this time, I had been struggling with a FOP flare up in my hip. I was visiting many doctors, one of whom told me about Dr. Michael Zasloff, a doctor who was doing research on my rare disease. I was absolutely stunned! I couldn't believe there was actually a doctor who knew something about my condition. I just had to go and see him.

Not long after that, my dream came true. I found myself lying on a hospital bed at the National Institutes of Health with my mother by my side and talking to Dr. Michael Zasloff. It was September 1987, and I hoped Dr. Zasloff would tell me that it was possible to have a hip replacement. Well, that hope was quickly shattered. But during our conversation, Dr. Zasloff talked about his research and the FOP patients he had seen throughout the years. I was mesmerized by his every word. How could it be that he knew 20 people with FOP? I had never even contemplated that there were others in the world like me. He put me in touch with Monica Anderson, another woman with FOP. She and I talked for a long time about everything under the sun. For the first time in my life, I was no longer alone.

I came home from that fateful trip with a list of names Dr. Zasloff had given me. And so, my mission began. I wrote to everyone on that list in hopes of finding a connection to others. I had a million questions. I wanted to know everything about them - their childhood experiences, if they were affected the same way I was, and whether they knew anyone else with FOP? I received 10 responses, including one from Nancy Whitmore (now Sando), and we became fast friends. The isolation of the past was finally over. Soon afterwards, The FOP Connection newsletter was created to share the information I was gathering from others with FOP. This connecting of people with FOP, all sharing a common goal, sparked the need to incorporate a nonprofit organization to raise funds for research. On June 8, 1988, the International FOP Association was born, and I have been honored to serve as President until I retired in 2013.

The first IFOPA fundraiser was held in 1989 and raised $200. Our first donation to research, made in April 1990, was $1,200. It was a small beginning, but a strong one. Nick Bogard, the father of a young man with FOP, organized the first large fundraiser for the IFOPA and FOP research. It was called The Jud Bogard Golf Tournament, in honor of his son Jud, and for several years this was the only IFOPA fundraising event. Each year, IFOPA fundraising has grown, and it continues today in this unique tradition of raising research dollars through the grassroots efforts of FOP families.

I still vividly remember my first meeting with Nancy Sando (woman with FOP and founding member), Andy Sando (man with FOP, who became Nancy’s husband), and Sandi Lee (woman with FOP) on a warm day in 1989. After living all these years without even imagining the existence of someone else like me, I wondered what it would it be like, at age 29, to finally meet someone else with FOP. Would our bodies look the same? Would our stories be similar? The comfort I felt in knowing that I was no longer alone in my struggle with FOP was a relief that I was not really expecting, but graciously accepted.

The first "official" FOP family meeting was held in Orlando, Florida in May 1991. Eight families attended, along with Dr. Kaplan, a soft-spoken man with a giant heart who has made FOP research his life's dedication. Although we had been working together for two years prior, this was the first time I met Dr. Kaplan in person. Also attending was Dr. Randy Cohen, who at that time was a medical student working in the FOP laboratory. In between visiting theme parks, the families compared notes on their lives and began to feel the closeness of dear friends with a long history. At the end of our brief time together, we all hugged goodbye, and many of us wept with the emotion of what that weekend meant to us. It was life-changing. This IFOPA tradition of gathering together, continues today.

The second meeting was in May 1994, attended by 21 FOP families from around the world and our research team, Drs. Kaplan, Zasloff and Eileen Shore. We had a wonderful time sharing our life experiences and socializing, while the doctors obtained important research data. The third family gathering was in April 1997, attended by 35 FOP families. By now, newly diagnosed FOP patients were able to connect immediately with others who had FOP. What an incredible feeling! Then in April 2003, twenty-eight FOP families attended the fourth family meeting with Dr. Kaplan, Dr. Shore, Dr. David Glaser and Dr. Hebela Nadar. In 2013, the IFOPA proudly celebrated 25 years together. More than 279 people enjoyed the three-day festivities, including 59 FOP members, representing a dozen international countries and six continents.

Even though family support is an important part of the IFOPA mission, so was the need to better understand FOP through research.

The First International Symposium on FOP in September 1991 was organized to meet the need for an international meeting of physicians and scientists to discuss the issues of FOP. This meeting in Philadelphia, Pennsylvania was funded with proceeds from the Jud Bogard Golf Tournament. Thirty physicians and scientists were invited to attend; the IFOPA was honored to host Prof. Michael Connor, the late Dr. Victor McKusick and Dr. William Gelbart, to name a few. Pictured to the upper-right are Dr. Zasloff, myself and Dr. Kaplan at the symposium. The symposium brought great medical minds together for the first time to discuss FOP research and for 20 people with FOP and their families an opportunity to meet. At the time, this was the largest gathering of people with FOP ever. By the end of that symposium, official "war" had been declared on FOP.

In 1992, the FOP Molecular Biology Laboratory at the University of Pennsylvania was established, and Eileen Shore, Ph.D. was hired to co-direct lab operations with Dr. Fred Kaplan. Previous FOP laboratory space had been provided by the Children's Hospital of Philadelphia, however, now we had the privilege of utilizing our own laboratory space. Ashley Kurpiel's drawing, "Save the FOP Children," which had appeared on the front cover of The First International FOP Symposium program book, was proudly hung over the doorway.

By October 1995, when the Second International Symposium on FOP was held, the IFOPA had grown to proportions we never could have envisioned in 1988. There was even greater interest in the work of Drs. Kaplan, Zasloff, and Shore as news of their experiments and discoveries reached the scientific community. The response to this symposium was overwhelming, with 75 physicians and scientists attending, as well as 40 families from all over the world.

The Third International Symposium was held in November 2000, when an incredible host of doctors, scientists and researchers from around the globe gathered to share their knowledge and brainstorm about FOP research. This event had been our greatest achievement to date, bringing together 85 FOP families from more than 12 countries. For many families, this was their first opportunity to interact with other people with FOP. The joy, excitement and comfort we experienced when meeting another family dealing with FOP was extraordinary!

On April 23, 2006 the FOP gene was discovered. When I received the call from Dr. Kaplan to attend the press conference at the University of Pennsylvania I was overwhelmed with joy. I cried and told him this was the greatest gift that I had ever received having the gene discovered in my lifetime. My dear FOP friend Stephanie Snow and I were honored to speak at the press conference alongside our families, including other FOP families: the Cali’s, Licht’s, Weldon’s, and Megan Olsen as well as other distinguished guests. The discovery of the FOP gene was an innovative moment in history which laid the foundation of the road map for future treatments of FOP. With the excitement of the gene discovery hope was shining brighter than ever.

The Fourth International Symposium was held in August 2007 in Orlando, Florida with 80 families from 23 countries including a group of worldwide clinicians, researchers, and scientists. On the heels of the gene discovery, this gathering was especially liberating with great hope of the future while enjoying time together in family workshops and clinical appointments.

While I have touched on a few of the monumental events that have occurred, there have been many other important milestones that have taken place. For additional insight into the incredible work that has taken place, click the following links:

History of FOP
History of the International FOP Association (IFOPA)

As I reflect on the last 30 years, I am amazed at how far we have come. I am astonished by how our expansion of international collaboration, and the advancement of technology has changed the experiences for families in its ability to globally unite us.

We are now in an era of clinical trials; a time we have all dreamed of and hoped for.

In 2014, Clementia Pharmaceuticals started the first clinical trial for FOP with its Phase 2 palovarotene clinical trial. Currently, in Phase 3, we are deeply grateful to CEO and founder Dr. Clarissa Desjardins and her amazing team. Additionally, a clinical trial with Regeneron Pharmaceuticals for the compound LUMINA-1 has just begun. We greatly appreciate their interest in developing a drug as a treatment for FOP.

The FOP community now and in the future will be forever indebted to the FOP children, adults and their families who are participating in these and future trials to help all of the FOP community worldwide. In addition, the invaluable gift of donated tissue and organs to research by FOP members also serves as an ongoing gift to the community to unlock additional pathways into this complex condition.

In closing, I would like to thank my family and life partner, Robert, for their love and support on this incredible journey. My love and gratitude to the FOP community and the many families that I have met along the way who inspire, teach, and motivate me every day. This journey would not have become what it is today without the family’s grassroots fundraising efforts and the support of many community donors. We have embarked on a journey together and we have been united as one to make our dream of a treatment and a cure for FOP a reality. Hope is alive!