Years ago, Marie Fahlberg was touched by an article she read in the IFOPA’s monthly newsletter 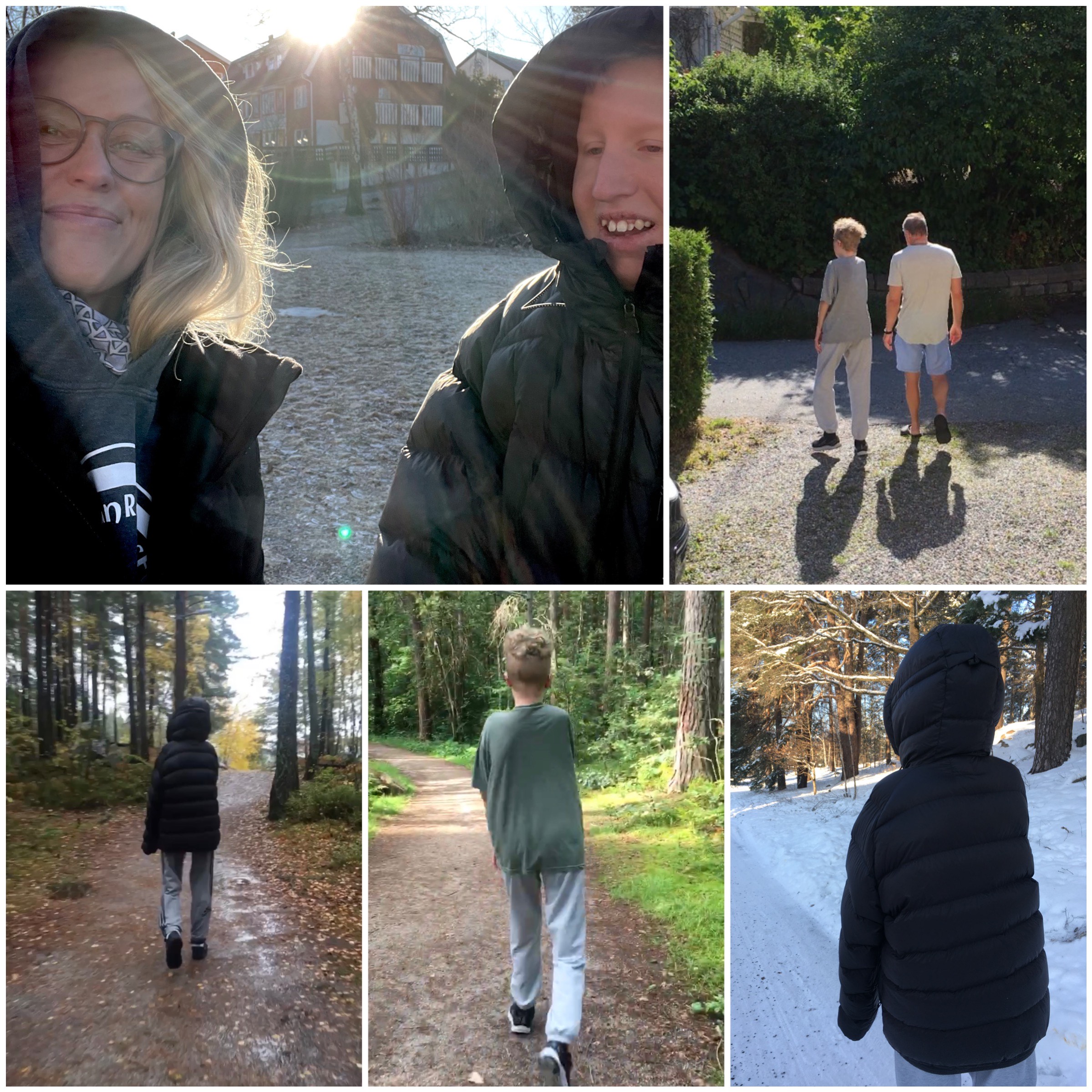 FOP Connection. Megan Olsen, whose son Hayden has FOP, was running to raise both awareness and funds for research.

“I saw the pictures filled with smiling faces and hopeful, positive energy,” Fahlberg recalled. “It has always inspired me.”

Fahlberg, who lives in Sweden, and her 23-year-old son Hugo, diagnosed with FOP at age two, take daily walks together to stay strong and healthy. As the pandemic took hold in early 2020, they continued that routine. But Fahlberg saw the mental and physical toll COVID-19 was taking on many, especially those who were isolated or did not prioritize staying active.

Rather than sit by and watch people suffer, she decided to do something. Fahlberg trusted walking and other physical activity was the best option. Not only could it be helpful for others, but it could also support a cause dear to her.

“I wanted to inspire people to start moving to stop the negative spiral,” said Fahlberg. “I came up with an idea where I could raise awareness for FOP at the same time, but I needed help with the fundraising part.” 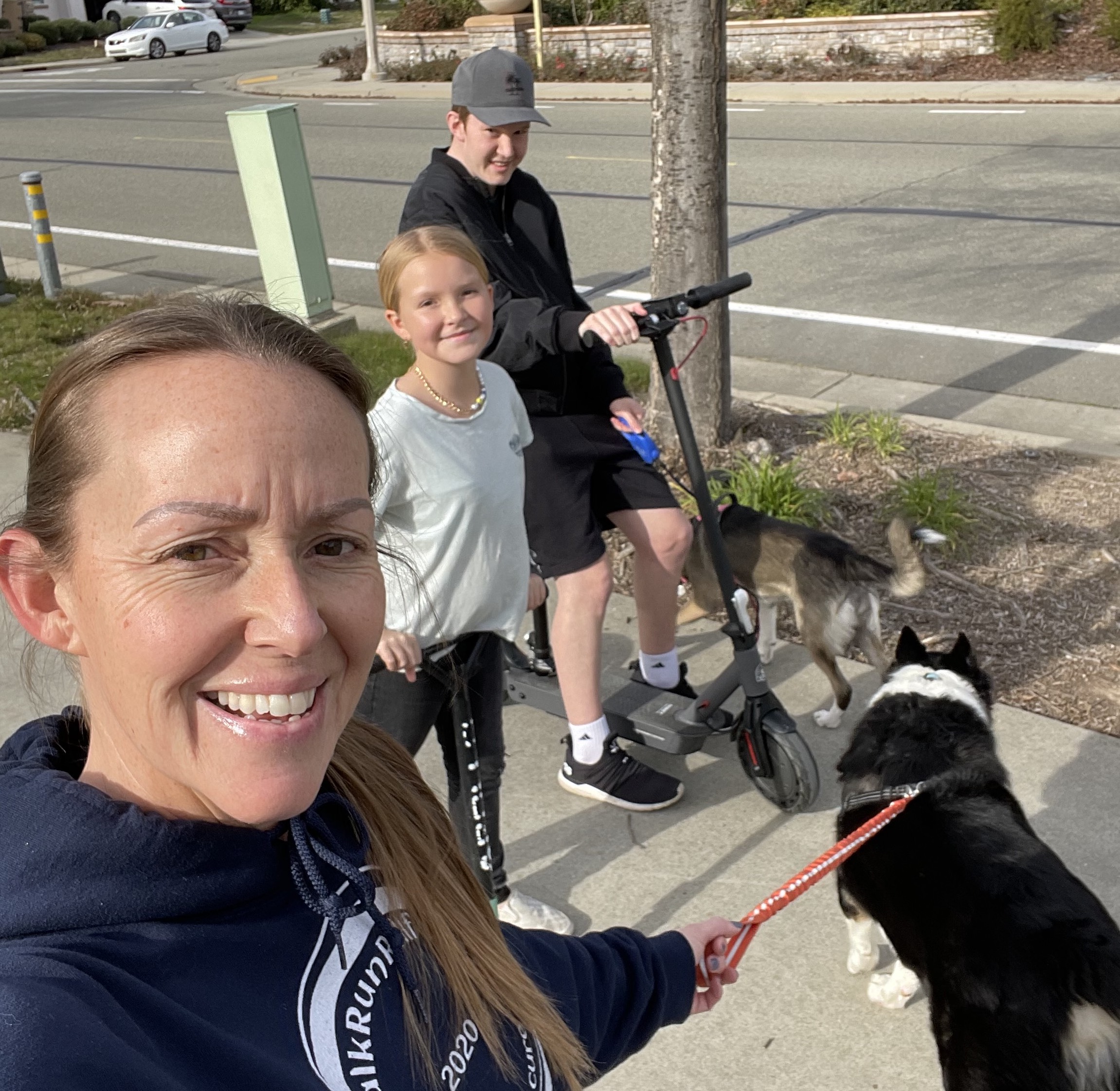 She posted in a Facebook FOP Moms group to see if anyone wanted to join her. As it happened, Sarah Casebolt ofthe United States had similar goals. Casebolt’s 19-year-old son Corey was diagnosed with an FOP variant when he was 14. Like Fahlberg, she wanted to start a campaign but wasn’t sure how to go about it on her own.

Realizing how well their interests aligned, the two exchanged a flurry of online messages and encouragement. Twelve days later, #WalkRunRollforFOP — a campaign that encourages people to get outside and move regularly — was born.

Participation is easy and accessible. To take part, Fahlberg and Casebolt suggest walking, running or rolling just one mile or completing 20 minutes of activity each day. To raise awareness while at it, people can purchase a custom t-shirt to wear during their activity and post an image to social media using the hashtags #WalkRunRollforFOP or #MOVEforFOP.

Originally, the fundraiser was intended to last just 100 days, beginning on September 23, 2020 and ending on December 31. Fahlberg and Casebolt thought it would be a good way to finish out 2020 on a high note by getting outdoors to walk, run or roll toward better mental and physical health. The FOP community embraced the idea.

“The response was beautiful,” said Casebolt. “We received a lot of participation and support — a lot of excitement! Beautiful photos from all over the world have been shared.”

What began as a temporary challenge has grown into a long-term movement continuing to gain traction. As COVID-19 persisted into 2021 — and beyond — Fahlberg and Casebolt continued the campaign to help cope with ongoing challenges. Now in its third calendar year, they realize people have less free time than when the campaign began. To make it easier to continue participating and staying active, they have planned three “MOVE for FOP & Your Health” online events for 2022.

The first event was held on January 31, Corey’s birthday. The next one will be on April 23, FOP Awareness Day, and the last event will take place on September 23, Hugo’s birthday.

Again, highlighting how easy it is to join in on the fun, Fahlberg and Casebolt encourage others to use the online event days as an opportunity to host their own local walk or run, to kickstart a personal activity streak or simply get out and move with friends or family.

“Participation is easy! Get outside and take a walk or go for a run! Ride a bike or scooter! Spin the wheels on that wheelchair!” said Casebolt. “Take a photo and share it with us! Buy a t-shirt and show it off to spread awareness to those who see you.”

For both Casebolt and Fahlberg, that is the key — to spark curiosity, inspire questions and raise awareness about FOP.

“How many people actually know what FOP is? Not many,” said Casebolt. “Creating awareness is the first step to receiving support. Educating friends, family, neighbors and strangers on what we’re fighting for creates understanding and compassion in their hearts to help our mission.”

Beyond introducing FOP to more people, Fahlberg and Casebolt are hopeful that #WalkRunRollforFOP will have a lasting impact on each participant’s well-being. As FOP moms, they know how precious our health is.

“At its roots, the campaign is about educating people about FOP, as well as highlighting the need for everyone, everywhere — no matter the condition their body is in — to keep moving to stay healthy,” said Fahlberg.

Casebolt added, “Wellness should never be taken for granted, but all too often, it is. As mothers of children with FOP, we see the world that a lot of people will never have to experience. It creates an entirely new outlook on movement and health and an appreciation for every breath we take.”

Despite the rush and demands of modern life, both women squeeze in activity whenever they can.

“Life is busy — no doubt about it!” said Casebolt. “I personally, am not able to participate as much as I’d like to, but every chance I get, I’m walking or running to represent FOP. That’s the beauty of it! Do it when you can.”

For Fahlberg, a walk with her son remains one of her favorite activities.

“We’ve been walking almost every day of Hugo’s life; always trying to find ways to incorporate movement naturally,” she said. “And while walking together, the talks we have add so much value to life.”

Although Fahlberg and Casebolt are not sure what the campaign will look like in the future, they are optimistic about the possibilities. Taking it one day at a time — adapting as they go — they remain committed to their original goals.

Fahlberg explained, “With awareness, we build knowledge. With movement, we improve health. By raising funds, we impact the future of FOP.”

Visit the #WalkRunRollforFOP Bonfire fundraiser page to order your t-shirt, and be sure to follow the campaign on its Facebook page.