For One Rare Boy

Kelly Griego and Kyle Wallace have been good friends since third grade. Flash forward a few decades, and today Kelly and Kyle’s kids are also buddies.

“We grew up together in Wisconsin and our families have stayed close,” Kelly says.

When Kyle’s son Eli was diagnosed with FOP in September of 2016, he called Kelly to share the news. That happened to be the same day Kelly signed up to compete in an upcoming Wisconsin Ironman competition.

“I’ve always been a runner,” explains Kelly. “As Kyle and I talked, we got around to discussing raising money to support FOP research and doing something to help raise awareness.”

Blending his passion for running with a calling to be of service was not new to Kelly. Since 2011, he has guided blind athletes in marathons and half marathons.

“I worked part-time at a running equipment store and there was a group of differently-abled athletes who would come in all the time,” Kelly shares. “I got to know them and eventually I began training to guide people with low vision and blindness so they could compete.”

To help draw attention to FOP Kelly has branded all of his running uniforms, kits and gear with the “For One Rare Boy” tagline—in honor of Eli of course. He also brings plenty of hats and shirts to give out at races.

And when he can, Eli is on the sidelines cheering Kelly on. 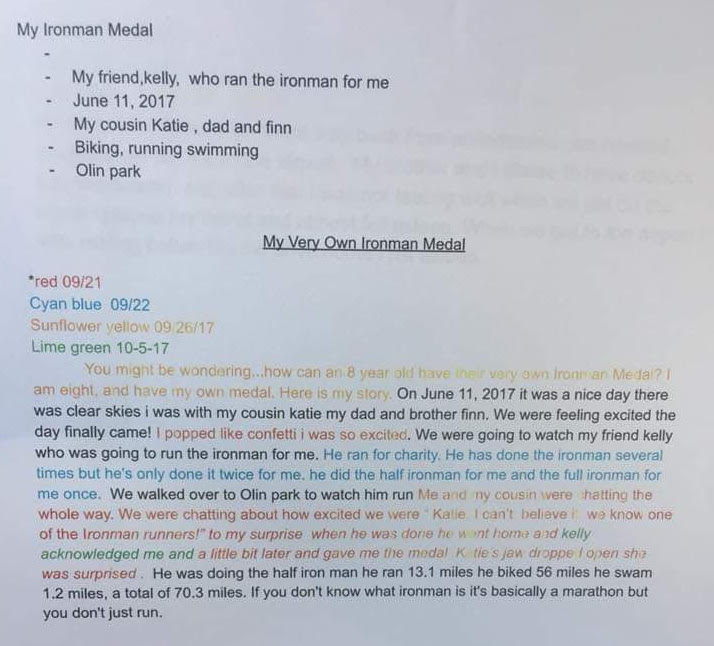 “I give Eli the medals I get from the races I participate in,” Kelly says. “It’s a nice experience to share with him. He wrote a neat story about getting the medals for his class at school.”

Last summer, while visiting his wife Meghann’s family in southern New Jersey, Kelly was able to visit the lab at UPenn where FOP research is taking place.

“We went to a Phillies game while we were there and I posted a picture online,” he explained. “Kyle texted and asked me if I would drop off bagels for the team at UPenn.

“Meghann and I drove back to Philadelphia early the next morning to drop off breakfast, meet the lab staff and spent an hour with Dr. Eileen Shore.”

When he’s preparing for races you can also find Kelly on his training bike at the farmer’s market. He’ll often set up for hours at a time to work on his conditioning and answer questions about Eli and FOP.

“You need to get creative,” Kelly explains. “People can’t ask questions during races, so this gives me a chance to really share with people and pass out more hats and shirts.”

Kelly urges anyone who wishes to help raise money and increase awareness for FOP to turn their interests into opportunities to start conversations.

“We all have something we enjoy doing,” he says. “Try to leverage that passion in a positive way.

“Just don’t be afraid to try. The worse that can happen is you raise a little money and help spread the word.”