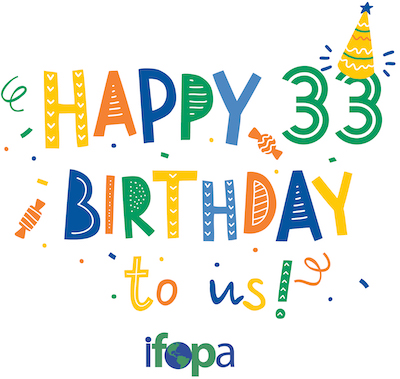 33 years ago on June 8, 1988 the IFOPA was officially formed under the leadership of our Founder and President Emeritus Jeannie Peeper. As Jeannie shared on the IFOPA's 30th anniversary in "My Journey, "... following a fateful trip to the National Institute of Health and a visit with Dr. Michael Zasloff, my journey of hope began. It was there I learned I was not the only person diagnosed with the rare bone condition of fibrodysplasia ossificans progressiva (FOP). The power of desire and a voice was born, igniting the expedition to find others that have this rare condition. In 1988, my vision to create the International FOP Association (IFOPA) became possible while working diligently alongside 10 other founding members."

Jeannie goes on to share, "There have been many dedicated people since 1988 that have molded the foundation of today's success stories surrounding FOP. The IFOPA has provided the platform for growth, commitment, focus and community needed for the inclusion of families living in a world of uncertainty and rarity. All the while, it is the families and people with FOP, that have driven the story line, made the sacrifices, and funded the many milestones that have led us to today’s summit. It is the voices that have gathered as one, that have made a beautiful and unique melody."

So today, as we reflect on the IFOPA's founding 33 years ago, we hope you take tremendous pride thinking about the role that you have played in helping us in our mission-critical work:

To fund research to find a cure for FOP while supporting, connecting and advocating for individuals with FOP and their families, and raising awareness worldwide.

Thanks to you, the IFOPA has come a long way in 33 years, but the story is not over. We, the IFOPA's board and staff, are with you in this fight to end FOP.

To read stories shared by six of our founding members, visit ifopa.org/11_founding_members.